The 10 most controversial questions ever asked

The 10 most controversial questions ever asked 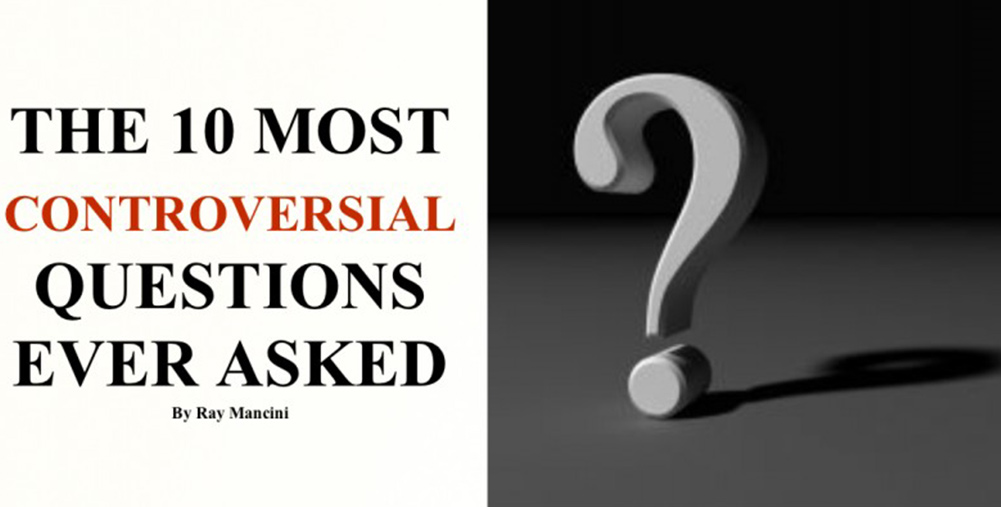 There are certain issues that consistently cause serious disagreements, sometimes-violent ones. Some of these can produce lively debates, while others are capable of causing full-scale wars or acts of terrorism. For those who don’t shy from controversy, here are the ten most controversial debate topics of modern times.

1. Is There Life After Death?

This is one of the most important questions of all, as everyone’s life ends sooner or later. Yet no one has ever answered it definitively, and there’s no reason to believe this will change anytime soon. All of the alleged evidence for things like ghosts, reincarnation, and heaven or near death experiences can, skeptics claim, be explained away scientifically. One theory suggests that “ghosts” are really a type of electromagnetic energy. Near death experiences are written off as delusions produced by certain parts of the brain being stimulated. On the other hand, no one has proven that life after death is a fallacy either.

2. Is There Life on Other Planets?

Until a UFO lands in a major city and aliens exit from the craft, this topic will never be resolved. Interestingly, even the most scientific-minded people tend to believe that it’s likely that life exists elsewhere in the universe. No specific UFO sighting, however, is universally acknowledged as evidence of extraterrestrial life. Skeptics as hoaxes, military aircrafts from secret projects, comets or other non-alien phenomena, explain them. Each and every claim of a UFO sighting, alien abduction or encounter with extraterrestrial life is endlessly debated and the answer remains elusive.

Vegetarians and meat eaters never tire of rehashing this age-old ethical dilemma. Even scientists don’t agree if humans are more like herbivores or carnivores. Most agree we are omnivores, which means we are capable of subsisting on a plant-based or flesh-based diet. On the one hand, people don’t need to eat animals to survive, so perhaps it’s kinder not to. On the other hand, one can look at nature and point out that life consuming life seems to be the general rule. Vegans take vegetarianism a step further and avoid all animal products. Some meat eaters assuage their consciences by eating only meat from animals that were treated humanely.

4. Should Murderers and Other Brutal Criminals Be Executed?

This may be the most contested issue in history. Polite people avoid asking the question. Philosophers endlessly argue it. Fanatics kill over it. What makes it most frustrating is that it’s impossible to answer it in a way that will satisfy everyone. If God does exist, He/She/It exists in a transcendental way that cannot be demonstrated the way we can prove a rock or dog exists. To some, this proves how great God is. To others, it only proves that the whole concept is a delusion. Alleged communications or visions about God can be considered revealed truth or mere hallucinations.

This is an emotional topic that puts animal rights against the possibility of scientific and medical breakthroughs. If animals must be killed and possibly even tortured for the sake of developing a cure for cancer, would this be justified? Animal rights activists often claim that such breakthroughs are unlikely, as tests on animals don’t necessarily translate to humans. This is an issue that has extreme advocates on both sides, and also some who would advocate a middle ground. It also depends to a large extent how highly one values the lives of animals.

7. Should Drugs Be Legal?

This goes beyond issues like legalizing medical marijuana. What about hard drugs like cocaine and heroin? Libertarians argue that taking drugs should be a personal choice, even if it causes one harm. The opposing view is that society has the right to enforce certain social norms even if this infringes on individual rights. Another aspect of the issue is that criminalizing drugs may contribute to violent crime by making the illegal drug trade more profitable. Opponents of legalization claim that making such substances legal amounts to sanctioning their use.

8. Is Torture Ever Justified?

Most people would argue against torture in theory. However, suppose torturing one person could prevent a terrorist attack that killed millions? On the other hand, if one says torture would be justified only in such extreme circumstances, who gets to decide when the situation warrants it? There is also the question of what, exactly, constitutes torture. This is an example of a wider philosophical question of “does the end justify the means?” It’s a difficult issue that will probably never be answered conclusively.

To advocates of strict gun control, many people believe that restricting access to guns would make society safer. The opposing argument is that gun control only takes guns out of the hands of law abiding citizens and does nothing to prevent criminals from obtaining them illegally. The two sides manage to find all kinds of studies and statistics to support their respective arguments, but still the debate rages on. Violent incidents today are often used as excuses for people to add fuel to the flames of this ongoing debate.

10. Is Evolution or Creationism the Truth?

Those who believe evolution is a proven fact claim this should not even be a matter for debate. Creationists, meanwhile, insist that there are holes in evolutionary theory that make it far from a settled question. There is also the camp that claims they have found a more scientific alternative to evolution in the form of Intelligent Design. Evolutionists generally believe this is simply creationism trying to sneak in through the back door. The debate is complicated further by people who believe humans were genetically engineered by aliens. In that case, were the aliens created or did they evolve?